Wine4all Supports The Responsible Consumption Of Alcohol.
By entering this site you agree that you are of legal drinking age and agree to our Privacy Policy.
Yes I am No I am not 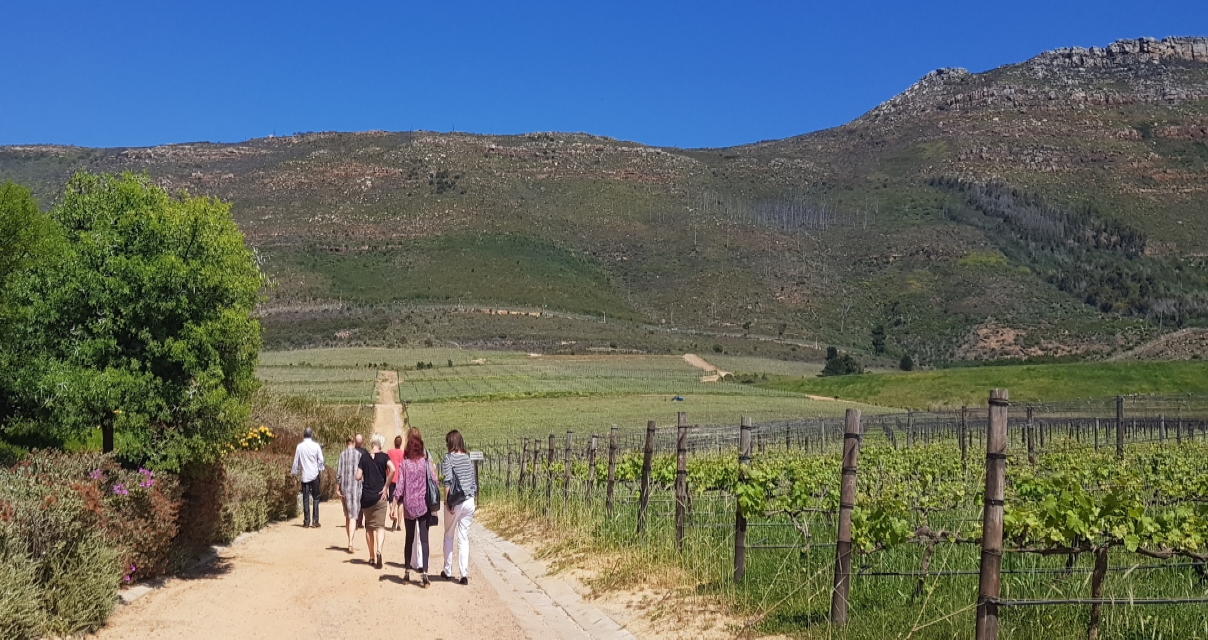 Extra extra – Read all about it...

Come join us on tours through the magical vineyards in the Western Cape. There are so many to choose from and so little time…

``The most knowledgeable, resourceful and pleasant guide you could find.``

When you come on a tour with me, you will be treated to interesting out-of-the-classroom lessons and discussions which may include geography, history, science, politics, philosophy, sociology and art, not to mention an introduction to the myriad culinary delights that this part of the world has to offer!

What her clients are saying....

“We met Kim for the 1st time when she became our guide through the Winelands of Stellenbosch. Friends of a friend, referred her to us & we couldn’t have been more pleased!” – Frank & Susan (USA)

“Kim is extremely knowledgeable about wine and takes the trouble to listen to one’s interests and needs. Despite her impressive knowledge, she is not at all a wine snob – really important in dealing with people of all levels of knowledge about wine.” – Neale (UK)

This wine region with a difference lies a mere 65 kilometers north of Cape Town, named Swartland or ‘black  country’ after the indigenous Renosterbos, which turns a dark colour at a certain time of the year, it could be argued that some of the most innovative wines are produced here.

Just a short and sweet 20 minutes’ drive from Cape Town, Durbanville is, perhaps, best known for its outstanding flinty, herbaceous Sauvignon Blancs. However, you would be remiss if you didn’t take the time to try her fantastic red wines and MCC’s (Methode Cap Classique) aswell. Outstanding cool climate examples of Chardonnay, Shiraz, Pinotage and Merlot are also produced this pretty little hilly wine area.

This world renowned wine growing region with her premium, award winning cool climate Sauvignon Blancs and Bordeaux Blends is just a short 20 minutes from the V&A Waterfront and 30 minutes from Cape Town International Airport. Nestled beneath Table Mountain National Park  and commanding unsurpassed vistas of False Bay and the Constantiaberg & Table Mountain Ranges, lies this, the oldest wine-making region in the southern hemisphere.

Stellenbosch has the most wine producers of all the wine producing regions in Southern Africa and is probably the most famous. She is steeped in history and home to some of the country’s best known wine estates. All this yumminess lies just 40km east of Cape Town – a quick  45 minutes’ drive.

Having been dubbed the Gourmet Capital of South Africa, Franschhoek’s food and wine route is beyond compare.
The Valley of the Huguenots, as Franschhoek is also known, (a mere 50 minutes’ scenic drive from Cape Town) became home to a community of French Huguenots who fled their country from religious persecution. Franschhoek has been one of South Africa’s chief wine-making regions for over three centuries, and this history permeates every element of the town. The fertile valley is where the French first made wine in South Africa 300 years ago.

The historical wine producing town of Paarl lies a mesmerisingly scenic 45 minutes’ drive from Cape Town. The name means “pearl” and was named for the enchanting vision of the three iconic rounded granite outcroppings that form the top of Pearl Mountain, glistening with dew in the pale dawn light. Paarl is the third-oldest European settlement in the country and the largest town in the Cape Winelands.

Just a group of friends looking for incredible/unbelievable wine deals to pass on to you...
Wine4all and All4wine

Delightful White Wines to your door from ONLY R65/